In the State of Utah our Dental Association puts out a publication every two months called the UDA Action. In the January February 2019 publication Dr. Chamberlain, our UDA President, shared some fantastic stats on dentistry here in Utah. If you live in another state, listening to this podcast, you might want to take note on my comments to this article, as it may have some cross-over where you practice.

Last September, Marco Vujicic, an economist and head of the ADA’s Health Policy Institute (HPI), came to the Roseman Dental School, located in South Jordan, Utah, and presented information to the faculty and staff of Utah’s two dental schools. You did hear me correctly, we have two dental schools in the Salt Lake Valley. In that lecture, Dr. Chamberlain states, Marco noted how unique dentistry is in Utah compared to the rest of the United States. This lecture included multiple graphs showing the state of dentistry in Utah.

I’m going to discuss the graphs Dr. Chamberlain shared, state his statements, and add a few statements of my own. 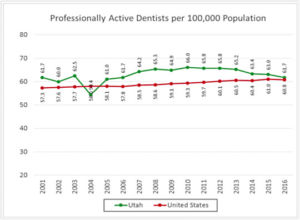 The first graph showed the “Supply of Dentists in the State of Utah.” This slide showed the number of dentists per 100,000 population. The national average in 2016 was 60.8 dentists per 100,000 people. For years Utah was almost always way above the national average, meaning we had a surplus of dentists. However, dentists have been leaving our state on an average of 2.2%. It was written that because statistics show that dentists are leaving the state at a rate of 2.2%, we may currently have a lower dentist to population average than in the rest of the country, considering recent population growth.

I believe the real story why dentists come and go, or just don’t stay at all, is because you can make a lot more income elsewhere doing dentistry. That will become evident here shortly.

The second graph shows the “Dentist Workforce” in the US. The graph shows that Utah has the highest percentage of dentists working in a solo practice, with about 65% of dental practices in the state having just one dentist. What was interesting to me is Dr. Chamberlain stating Utah has only 3.9% of dentists working in Dental Service Organizations (DSO). While our neighbors to the south in Arizona are at 19%, which is the largest percentage of dentists employed by DSOs according to Dr. Chamberlain.

The fascinating thing to me is for years we’ve been told how DSO’s are going to take a large bite out of the practice of dentistry as we know it, meaning a significant decrease in solo practitioners. Yet it seems to me the DSO’s are topping out at around the 20% mark in the most saturated states. Utah is a very conservative state, and we certainly enjoy the freedoms that a solo practice has to offer. The problem is most dentists simply do not have the business training required to effectively run a dental practice, especially after graduating from dental school. So, they tend to work for someone else, learn the business of dentistry by osmosis, and then go out on their own into solo practice. This pattern simply explains why dentists often times struggle with the business end of their practice. Having said that, I can honestly say that dental practices that suffer from lack of business skills still see a measure of success that cannot be underestimated. Dentists didn’t graduate from dental school and pass board exams by being stupid. They just don’t know what they don’t know, but the majority can and are willing to learn. 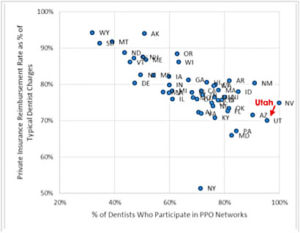 The third graph title was, “The Impact of PPO Plans.” This graph showed how Utah took the most PPO Insured plans in all the US except for Nevada. This makes perfect sense to me as we’ve had an increase in clients in the State of Nevada, where they want to learn how to increase their revenues due to the fact they are inundated with PPO plans. What troubled me about this graph was the comment made stating, “As a result, the insurance companies’ reimbursement rate as a percentage of our usual and customary fees is lower than most states. Data also shows that Utah dentists saw a 9.7% decrease in insurance reimbursement rates from 2010 to 2015. This probably correlates to the number of dentists that are contracted with insurance companies”.

It’s a fact that dental insurance companies have greater control in geographical areas where more dentists take their plans, but the main driving force for reimbursement rates we are contracted with comes down to one simple business concept, and that is profit and loss. In other words, how many dollars are taken in the form of premium payments to the insurance company within a geographical area, versus how much the insurance company paid out in claims. It’s simply driven by profit and loss, like any other business. What companies and individuals pay for their premium rates is significantly less in Utah compared to other states. I’ve had many candid conversations with insurance managers, and they always state if premiums were increased, coverage would do the same. It’s just simple business math.

One thing that is very correct in this statement is the fact that dentists in Utah, and surrounding states, have seen a decrease in reimbursement rates, which translates to a decrease in our salaries. Dentist salaries have remained stagnant, or have decreased, since 2004. But if any of you follow the stock market like I do, publicly traded insurance companies seem to be profitable year after year. Their stock prices and company growth easily confirm my statement.

Which leads us to the fourth graph found in this awesome article titled: “Dentist Earnings in Utah”. Net earnings for dentists in the State of Utah have dropped significantly since 2006. Utah dentists make nearly 27% less than their colleagues do nationally. But this one statement made on this graph, in my humble opinion, is an inaccurate assessment, “hopefully as the local economy continues to improve, we will see these numbers trend back to approximate the national figures.”

What dentists completely fail to understand is this one simple business principle: profits do not always increase because the economy increases, profits increase because you’re actually profitable on each procedure. The argument to my thoughts on this would be if you are not busy in your practice, then you have a production problem. But ask yourself this all-important question: how many of your colleagues are working their guts out and still find there is not enough money to go around at the end of the month? Do you want to see one hundred patients in a month with working appointments at a 10% profit margin or 20 patients with a 40% profit margin? Practices who are predominantly filled with PPO patients almost always see their profit margins hovering around 7 to 15%. Fee-for-service practices tend to see a 30 to 55% profit or more.

The fifth graph showed that Utah dentists are the third lowest paid nationally, with Louisiana and the District of Columbia being the lowest in the nation for dentist salaries. Is there any wonder why we are seeing dentists leaving the State of Utah to practice dentistry?

Everyone asks me, is it possible to even see a 25% profit margin, let alone a 40% profit margin, with patients who are PPO insured? The simple answer to that question is YES. That is what we teach at My Practice My Business. We help practices reclaim forgotten profitability in dentistry with our key methods and products. And we seriously have fun doing it!

We had our team meeting this morning, and I asked Michael, our software engineer, if he could make some changes to our statistical software called My Dental Stats. He asked Tracy, our general manager, to send him a “mock up” of what I was asking for. And here is what I want to have our software track: In one column I want the CDT Codes, next column I want our UCR or FFS fees. Then in the next columns I want the first PPO plan in the alphabet we take, their contracted fees, and the percent loss in relationship to our UCR or FFS fees. For example, if we charge $1000 for an all porcelain crown, D2740, and the first PPO plan’s contracted fee is $600, then the next column will show a -40% loss.

Now the scary part. As Tracy did a mock-up of our ten most common procedures, we were seeing losses of 37% to 61%. I just about had a heart attack on the spot. This type of analytics is invaluable for all of our practices. We ended up dropping two plans that we take on the spot. I teach, preach, and expound on the fact that our reimbursement rates have been declining, but I had no idea it was really that bad. No wonder practices are feeling the pinch. Mine isn’t as much, and same with our clients who engage on what we teach, but the majority are simply not as profitable as they need to be.

My friends, if you do not know your direct operating costs per hour, and what your reimbursement rates are per procedure, and evaluate the two, you will never be able to turn a true corporate profit. When will enough be enough and you make the call to our company to learn how to become profitable again? I know a hand full of you out there are doing a pretty good job with some upgrading and value-added services, but you fall way short of your potential. Bottom line, you simply cannot continue to do high-end dentistry at the rates of reimbursement you see from PPO plans. And if you think a better economy is the answer, you are only fooling yourself. If I did not offer upgrades and value-added services to my patients, and charge them fairly for those products and services, I would be that doctor barely making 10% profit margins. I would be working my guts out just to stay afloat. Insurance reimbursements will destroy you if you do not know how to offer choice, and charge for it, regardless if they are UCR/FFS or PPO type patients.

Dental practices have carrying capacities. Doctor, you can only run so fast, you can only see so many patients each day, and you can only have so many staff members on your payroll. In addition, if you are in solo practice, you have got to make a margin of profit that can fund your retirement, buy new equipment, and still give you the living that you worked hard for and deserve. Let My Practice My Business teach you business principles that will change the way you run your practice, and realize hidden revenue streams you never knew existed. They are simple business principles that corporations utilize every day, and you should too.